Several years ago, Swedish designer and collector of antiques Michael Clattenburg has received an invitation to work for Arab sheikhs and since then he is mainly based in the UAE. He decided to change his 200-meter apartment in Stockholm, to where he makes only short visits, to a more compact housing.

The current designer’s apartment was purchased largely on impulse – he came to the meeting with the realtor straight from the airport, and its design has become a serious challenge for him. Michael had to sell a significant part of his collection and start designing furniture that would help inhabit the tiny apartment. Nevertheless, he managed to organize everything so as to preserve his favorite things and create an atmosphere of luxury in the apartment.

Folding sofa was designed by Michael in case the guests would spend a night in the apartment. Tables are also of his work. They have drawers for small items, the TV remote and chocolates, and also you can put your feet on them or use as bedside tables with the unfolded sofa.

Mirrored panels on the sides of the sofa help visually expand the space. As for the owner’s beloved antiques, they are present in the interior in the form of console tables, paintings and numerous accessories. Including a table lamp in the neoclassical style with pendants of rock crystal, which the designer bought at Sotheby’s.

There are two ways of working with a small space, either to minimize the furniture and accessories, or, conversely, to saturate the interior’s parts, switching attention to them. Michael has chosen the second option. He even decided to cut through an extra door between the bedroom and the living room, and put bivalve doors instead of the usual ones. Yes, it reduces the footage, but it gives the interior a grand spirit.

The designer decided to make the bedroom as conservative as possible – without TV and other technology. And here, too, all the furniture is old, including a bed with gilded Italian headboard and numerous mirrors, which are not only to decorate the walls, but also reflect light, expanding the space.

The hallway at one end abuts the toilet, at another – microscopic kitchen. All the walls, which are not occupied with kitchen lockers, are lined with glossy black tiles to visually expand the space. The hallway itself is too small – there was not enough space even for something to put under the mirror console for details.

But Michael was relentless in his quest to make the space more comfortable – and designed a folding chair, to make it easier to put on one’s shoes. Doors, leading to the rooms, are complemented by silk draperies – a simple way to add luxury to the space.

While decorating her apartment in Copenhagen, designer Mette Hagedorn used the white color and a variety of geometric patterns. Living room Mette’s Room has a pentagonal shape – the two outer walls form something like a bay window. Under the windows on the place of a sill a built-in locker is organized: magazines and books […]

Designer Christopher Coleman has worked out an interior design of an apartment in Miami in polka-dotted style. Trying to describe a good view from the windows, people usually use the word breathtaking. During the first visit to the site of his future interior layout, an apartment on the twenty-seventh floor at CanyonRanch condominium in Miami, […] 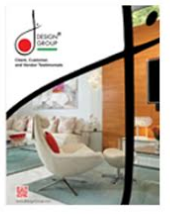